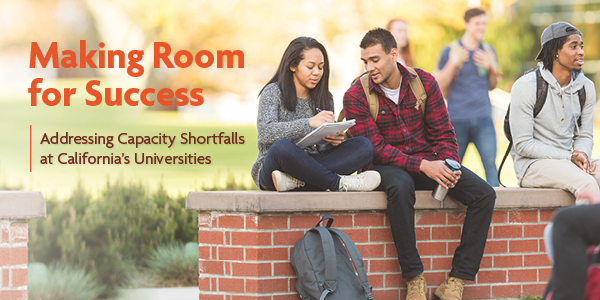 By 2030, about 144,000 college-ready students are expected to be turned away annually from four-year colleges and universities – nearly double the number kept away during the 2018-2019 academic year. The capacity crisis poses a serious threat to the state’s economy and will exacerbate already deep racial, income, and geographic inequities.

In recent years, California has made significant gains in student preparation and success in K-12 schools and community colleges. More students are graduating from high school than ever before, and more of them have completed college preparatory classes. In addition, growing numbers of community college students are earning the credits needed to transfer and continue their education at a four-year institution.

If the state doesn’t lean into and extend those successes, the capacity crisis means that many of those students will be unable to continue their education and earn a bachelor’s degree.

Data shows that the capacity crisis could cripple the state’s economic potential:

The crisis is particularly acute for students from low-income families and communities of color. The state’s ability to increase economic mobility will be hindered as students are forced to either take on additional expenses and move away from their regional support systems to obtain a college degree or enter the workforce without a degree.

The report details capacity gaps and labor shortages in three regions with large proportions of low-income families and communities of color: the Central Valley, Inland Empire, and Los Angeles. By 2030: